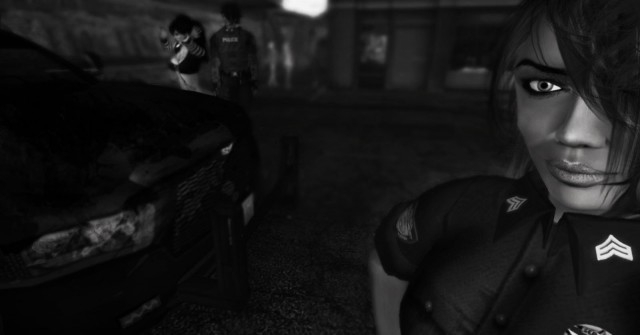 HATHIAN – On Monday, July 11, a violent arrest involved several police officers at the porch of the Titty Twister. The suspects, Khloe Glamour and Sharea Nightfire, vandalized a police car with a litter can in the open street. The situation was quickly controlled by HPD Captain, Heinrich Andel, who was at the time arresting an unamed suspect in the area, and other officers that were radio called when the incident started.  The two women were moved to the Hathian General Hospital due to the several wounds they experienced in the arrest.

Several witnesses claims that the police actions were covered in excessive violence, especially against Khloe, a former police officer that left the force after being accused of murder herself. Glamour maintains she was framed by her colleagues, including former lover, the deceased HPD Senior Officer John Morpork. “The girl was already unconscious when they decided to ride a police car over her, then they were talking about hanging her over the bridge,” claims one of the observers of the gruesome arrest, that prefered to remain anonymous.

Sharea Nightfire, the second suspect, was released from the hospital after she neglected further medical attention due to the lesser nature of her wounds – a status which could aggravate suspicions that officers involved had their own agenda on their brutal acts against Glamour. In an interview, she states, “the last time I saw (Capt.) Andel, I asked for my job back and he said not after what I did. So, I think that’s his motive for doing this to me.” As she continued about the incident itself,  “next thing I know, I’m in the hospital with both femurs broken, along with eight ribs and my cheek bone. This was so excessive!”  HPD officers refused to make any statement about the incident.

Murder on the Menu