Late Afternoon Wednesday, April 13th, 2011, 911 received a phone call about a corpse in the cemetery. Most would brush this off as a joke, as corpses are supposed to be in the cemetery, but thankfully the dispatcher took it seriously and alerted Police and EMT. 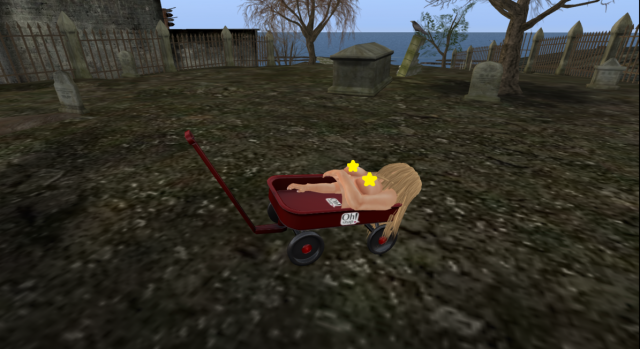 When the EMT  first arrived on the scene, they discovered a Little Red Wagon with half a body on it. Per eye witness accounts the victim was missing parts of her face, both breasts, and the lower part of her body was missing. Police are very hesitant to give information out. People are classifying the injuries on officer Orchid as “brutal”.

Later in the week, another 911 call was reporting a body in the cemetery again.  When police arrived, the body was found buried in the ground. There was a headstone with the word “HPD” written with blood at the  head of the plot. The body was confirmed to be that of Officer Brooklyn Manamiko. Word is she was in critical condition with severe injuries. No further information has been reported.

Are the police being targeted now too? What is the purpose for these attacks? Is it due to the police brutality seen and heard about in the paper and on the street? Do they deserve this kind of  treatment? Will things change? Is it the end of the world?

These attacks bring forth many questions, but little answers. Hopefully we will one day know why. Until then, we have some tips and suggestions.

I spoke with a rep from the FDH and gave the following information:

“Well, if this is going out to the community, then I would advise caution and being careful  while the police are working their hardest to get to the bottom of this.  Just use common sense and be safe.”