Shortly after dusk on the evening of the 18th, just when the city, for once, thought it was safe, another pair of bodies were discovered atop the roof of the local Master Bates Inn. 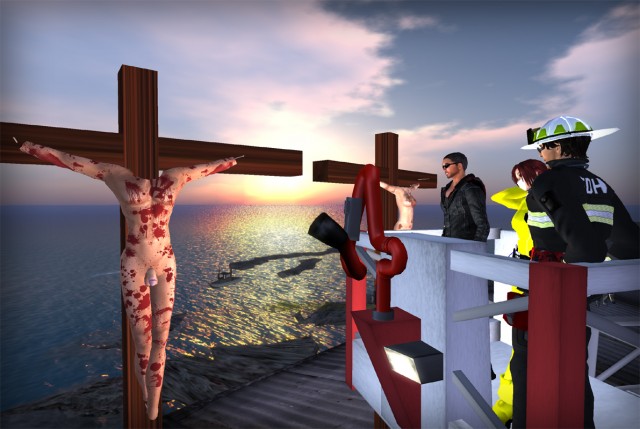 Nailed to crosses, an unknown male and female were found. Each corpse, just like the last, were missing their hands, feet, and this time, their heads. The bodies were skinned, and entrails removed, the typical MO for the Headless Harvester. Last, but most certainly not least, the killer’s signature was left below the left pectoral of each victim; a pair of lips.

But, again, this is not where it ends. Much like in the last discovery by the construction sight, the bodies had one last kick at the can before they were carted off to the morgue.

Body number six, the male, appeared to be leaking some sort of fluid, which was later discovered to be nothing more than common tap water. After Detective Senizen cut the stitching on the torso, half a dozen fish fell out of the cavity, and proceeded to flop on the roof before they died moments later. It was also later discovered that there were pieces of bread stuffed inside along with the sea life.

Body number seven, the female, didn’t look unusual until the threads holding the body closed were severed. Inside were eight rabbits, along with a few carrots, almost like the killer could murder, gut, and butcher humans, but was unable to leave bunnies by themselves without any food. Sources say that, just like the chicks in the last pair of bodies, the small rabbits had notes tied around their necks. The HPD has refused to release what they say.

Even with citizens being brutally murdered, and seemingly harvested for their organs, the police cannot seem to find the culprit, leaving us to believe that they either aren’t capable of doing so, or just don’t care enough.