This paper informed its readers a few days ago of the structural damages suffered by the Hathian General Hospital premises on Main Street as well as the possibility of them being condemned due to stated damages and the lack of funds to repair them.

It appears the abandonment of the facility was unavoidable, as two days ago the process of moving out all the recovered patients to a new location was started. This ‘new’ city hospital is actually older than the previous one, the building which used to serve as Hathian General a few years back located right next to the District 8 Fire Department HQ. 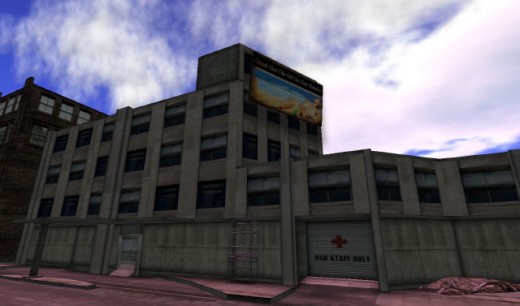 The reasons behind the move of what we knew as our hospital up till yesterday are undocumented, and rumors abound ranging from paranormal activities to structural deficiencies. Granted, most of these rumors are simply conspiracy theories or even delusions, but the fact remains this reporter was unable to find a reliable and conclusive reason for the move to Main Street.

Reassuringly enough, the building looks rather solid after last month’s process of renovation and restructuring, and as a Doctor Shuichiro Kohime assures us, the facility is up and running “fully functional and ready to take new patients.” Doctor Kohime kindly agreed to accompany our reporter on a tour of the new premises, which seems to be appropriately furnished and equipped with the needed machinery for the best patient care possible. The most evidently improved branch of the hospital seems to be the Obstetrics/Pediatrics department, a direct consequence perhaps to the baby boom caused by the spillage of Ovultine (a fertility drug) into the city’s water supply – a story covered by this newspaper last month.

The current premises are also more pleasing to the eye than the smaller somewhat shabby interior of the building on Main Street, which should improve the general mood of the patients recovered at the hospital who were known to complain about the less aesthetically satisfying green walls of the previous HGH. One such example of visual embellishment is the mural found on the second floor, a recreation of the one at Bellevue Hospital in New York City, originally painted by a fundraising organization dedicated to provide housing to AIDS patients, as both Doctor Kohime and Doctor Lake Gavilan, senior member of staff, eloquently described. Also important to mention are the numerous windows spread around the building, which light up the interior with healthy natural light, especially in the Recovery ward – another frequent complaint by patients housed in the previous facility.

However, not all aspects of the change in location are brightly lit and a pleasant sight, the largest of eyesores being the massive cut-down in personnel for supposedly financial reasons, or as Doctor Kohime described, a “fresh start”. One has to wonder how the Board of Directors intends to run a bigger facility with around 70% less staff than it had, which probably means a more strained and overworked medical team. Hopefully, this will not lead to errors in judgment and the wards, considering human lives are at stake here.

All things considered, this move seems like a positive chang,e although only time will be able to tell. Still, not everything is clearly explained and the curious mind might wonder just what hangs hidden underneath the tarp, and what sort of proverbial skeletons lie hidden in the basement (apart from the literal ones in the morgue). The Observer will surely keep a close eye on this new facility and it will do its best to keep you, its faithful readers, informed and up to speed, so stay tuned.