Victory was at hand for the Hathian Police Department and citizens alike as notorious criminal and apparent Reject co-leader Dr. Zacch Morane was apprehended tonight outside of Rader Records. 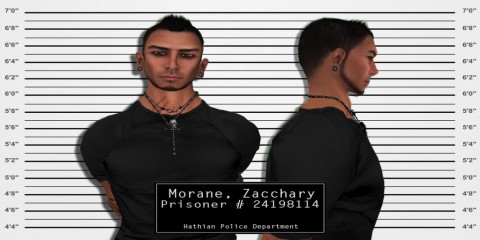 In what turned out to be another battle in the undeniable war between Ace’s Crew and the Rejects, Officer Reyes Aquila and Lieutenant Hendrich Andel arrived at the scene to find the Doctor had inflicted several wounds upon members of the Ace’s before surrendering with his own injuries to the police. According to the Lieutenant, Mr. Morane is wanted in connection with the fire last week at Rader Records which claimed the life of Rebecca Ann Summers, a young college student and club owner, “as well as other crimes against numerous victims.”

While it is still believed the woman’s death was a suicide, the details of the altercation beforehand remain suspicious, which Andel confirmed is under investigation, along with attacks on Tre Marjeta, the manager of the Gein Burger, and another a college student who wished to not be identified. The suspect is currently being held without bail pending further investigation by the Hathian Police Department as well as the Hathian District Attorney’s office, and any individuals with any information are encouraged to contact local authorities.