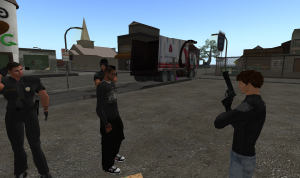 Rader Records was surrounded by onlookers, an ambulance, paramedics, and police officers tonight.  A man was hurt and although the details were unclear, it seemed to be some kind of gang involvement. However, as the paramedics were covering the injured, an off-duty officer, identified as Max exclaimed that a wanted murderer named Parnell Urqhart was on the scene.  Immediately, the other officers surrounded him and although he was off-duty, Max took the initiative in arresting him.  It seems that Max and Parnell had some history together and shared some blood spills as the two exchanged harsh words to each other.  The onlookers silently watched as a woman named Jena screamed in protest of the arrest.  With a promise for a lawyer, Parnell was arrested and was led to the police station for his murder charge.