HATHIAN — As of recently, the cities police and fire fighters have become the target of random attacks, which have sent two of them to the hospital in serious condition. These types of random, focused attacks are happening more often, it seems in the wake of a dieing gang war.

These attacks, the most recent being the last few days don’t seem to have an end in sight, nor do police have any leads.

First, Rookie Officer Boysie Blaisdale,who is also part of the new K9 team, is attacked and nearly killed by a man who refused to take off his mask at the Titty Twister Bar and Strip Club. Not even a few weeks after recovering, while out on patrol alone, he is attacked again by unknown criminals outside the hospital. His condition at this time is unknown. 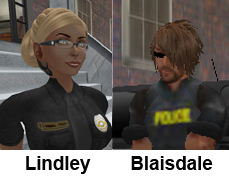 A few days ealier, the Police Departments Public Affairs Officer Fae Lindley, who was off duty at the time, was attacked by an unknow assialant at the Daily Grind. She managed to escape realitively unharmed as side from a new scar and some bruises. She was out of work a few days but is now back and on the beat again.

The most recent attack was on a fire department offical who was beaten and stabbed in a remote warehouse. Reports say it was to get at another fire official, but have not been confirmed.

Police officals say that this type of behavior is unacceptable and that these incidents are isolated and do not reflect the ability of Police and Fire officials to protect and serve the citizens of Hathian. If any citizens know anything about these crimes, they are asked to please report it to the police department.

All of these incidents are still under investigation.