The global credit crunch has hit not only the great nations but is here now squatting on the doorstep of every citizen in Hathian.  At every door of every business the repo man comes knocking.  After the boom time comes the world’s biggest crash and very soon YOU will see the results littering our streets with desperate posters and fliers begging you to ‘Eat here‘, ‘Drink there‘, ‘Buy one Please‘ and ‘Have sex with me, I’m broke!‘.

Evidence of panic was clearly seen when walking through the small town.  Respectable businessmen explained how they have been forced to give up their daily jobs to sell crack instead.  Students were seen acting as drug runners to support their studies; the local businesses no longer taking on part-time staff.  A larger than usual number of prostitutes have taken to the corners of streets toting their bargains – just $10 for a blow-job!

One particular group of people very keen to avoid resorting to criminal activities are the employees of the Gein Burger.  A recent memorandum sent out by the infrequently seen managers of this burger francise was leaked to the Observer.  Ms. Sorbet who had signed the memo was unavailable for comment and is believed to be on vacation with Mr. Sorbet.  Blaming the credit crunch for poor quarterly results and a downturn in profit, Ms. Sorbet states in the memo; “We, the Managers will be looking at making forced redundancies unless the situation is rectified.  Work hard people for your jobs are under threat.“

It appears that the two managers are not feeling the effects of the global market crisis themselves, for one Gein Burger employee informed us that they had visited the Hathian site just three times in the last year.  “Dey are always on vacation, every week dey go someplace new” she stated, obviously wishing to remain anonymous. 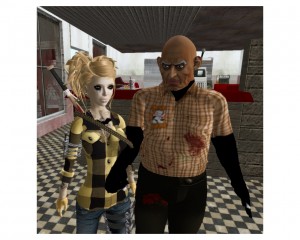 The fry-grill chef, an elderly man in distinct need of some anti-wrinkle cream remained steadfast in his support  of the Gein owners and refused to comment on the proverbial axe of redundancy hanging over his head.   Ellie Brim who works long hours at the Gein Burger summed up the feelings of the average person in town, “I feel pissed off, they don’t do shit to help us keep our jobs. I need’ ta pay rent n’shit!“

And very well said thought this journalist.  We all have rent to pay and as ever it is the underclasses of our town that look likely to be hit hardest by the money crisis whilst the owners of our local businesses continue to milk our efforts to line their own pockets.

Do fat cat bosses run your workplace yet threaten your jobs?  Do you feel that you are soon to be searching for another job as your workplace business goes under?  Are you the hard-working owner of a business about to go bust?   Contact the Hathian Observer to let us know.